Glass fiber mats based on wetlaid

Glass fiber mats can be used for a very wide range of applications, and this is a growing market.

Different types of lines are available – from small to large capacities. The following aspects are important for good web formation and lower consumption of expensive chemicals: Give the fibers enough room to move freely by applying sufficient turbulence to the water-fiber suspension; lay the fibers with the best fiber orientation and ensure that they are well distributed; double diffusor concept reduces the raw material costs.

The volume of wetlaid nonwovens materials for construction interiors is continuing to develop. Yet it is not only the volume of these materials that is growing, but also the demand for high-quality materials.
More and more buildings and houses are being built and rebuilt worldwide. This results in an increasing demand for construction materials. Manufacturers are developing products that are easier and quicker to apply and require less post-treatment than plaster-work or paintwork. An important part of these developments is based on wetlaid nonwovens glass fiber material. For example, the paper and cardboard materials used as facers and backing material on gypsum board dry-wall and polyiso roofing panels are now  being replaced by coated glass fiber veils. Increasingly, glass fiber veil is used in applications where esthetics are very important, such as ceiling tiles and wallpaper. The more traditional applications where esthetics are less demanding for glass fiber veil, such as reinforcement material for vinyl flooring, carpets and and bituminous roofing, are asking for flatter materials with higher tensile strength. Glass fiber veil is also used as filtration material and for battery separators. Good distribution of the glass fibers is essential in these applications. These developments require glass fiber producers to improve the properties of their products. A homogeneous mat with perfect fiber distribution is needed more than ever to meet the end-users' requirements. The market expects products with perfect fiber formation.

In order to achieve perfect formation, optimum control of the process must be guaranteed from the moment fibers are dispersed to the moment they are laid on the forming fabric.

Better formation can be achieved in different ways. Chemicals can be added to slow down floc formation, viscosity modifiers can be used to make the fibers more resistant to the fluid and slow down agglomeration into flocs, and surfactants can be applied to reduce the agglomeration forces. However, the use of chemicals has some disadvantages in addition to their cost. Concentration of the substances in the white water system must be controlled precisely, and the effect of the substances is dependent on process conditions that can be difficult to control, such as temperature and process water quality. In addition, the substances must be compatible with the binder system. This often causes unwanted side effects, such as foaming and bacterial growth, which must be combatted with other chemicals. A more efficient and cost-saving way to
achieve good formation of the glass fiberweb is the optimal design of the formation
process. 3 design aspects are essential in order to achieve good formation:

The wet end design of a wetlaid line for glass fiber mats has a significant impact on the forming process. Applying the best design can limit dependency on white water viscosity and surfactant chemicals.

Inclined wire formers for wetlaid nonwovens have been specially developed to handle long fibers. The consistency (= percentage of solids by weight) of the slurry needs to be lower if the fibers are longer so that they have enough space to move around freely in the slurry and there is enough space between the individual fibers (Fig. 2). In order to give the fibers the necessary space, fast (>500 m/min) and wide (>5.5 m) machines must pump enormous amounts of white water (>350 m3/min) through the former.

This places heavy demands on the design of the former, but also on the fan pump required (Fig. 3). This pump must be an optimum match to the rest of the forming system. The engineers of these systems must know both the characteristics of the former and of the pump down to a very detailed level in order to prevent mismatches. Such mismatches can have farreaching consequences. The system may operate´in the cavitation window of the pump, causing pulsations and fiber clumps. This can also seriously damage the pump.

Particularly after the production speed of existing machines has been increased, the fan pump often has to operate far beyond the optimum operating window. It is recommended to have new formers installed or existing formers converted by experts on inclinedwire formers and fan pumps.

For optimum formation, the fibers must be dispersed and remain so. Proper dispersion begins by mixing the fibers into the white water. This usually takes place in a mixing tank that is derived directly from the pulper commonly used in the paper industry. In practice, it has been established that the correct design of the agitator and the required power depend on fiber length, fiber diameter and, in particular, the sizing on the glass fibers.

After the fibers have been dispersed, they must remain in motion continuously to prevent agglomeration until they are laid on the forming fabric. Hence, the intermediate buffer and dilution tanks must also be equipped with agitators tuned to this specific application. It is highly recommended to test the behaviorof the fibers in combination with various types of agitators in order to ensure that thefibers are incorporated properly first of all and that they remain dispersed. It is certainly very important for the fibers to keep moving in the former. In most formers,this takes place in a diffusor block. In these diffusors formed by numerous tubes, energy in the form of pressure is converted into speed. However, this process cannot continue unchecked. If the fluid speed is too high, the critical speed is exceeded and the flow becomes turbulent instead of laminar. Turbulent flow is not desirable in the diffuser. On the contrary, it can lead to fiber agglomerations forming, for example clumps.

By applying 2 diffusers (Figs. 4 and 5), the fiber-containing slurry can be accelerated twice in immediate succession without the critical speed being exceeded. As a result, more dispersing energy is available just before actual formation of the mat, and the formation of too large flocs is prevented.

The veil must be of constant quality overboth the length (machine direction) and width (cross-machine direction). If the fibersare not perfectly distributed, this will lead not only to differences in the visual properties of the product, but also to differences in important physical properties, such as thickness, basis weight and tensile strength. To achieve perfect distribution, the slurry must be distributed pulse-free and evenly across the width. A pulse-free stock flow can be obtained by using a well-designed fanpump in combination with the dual diffuser concept. Any residual pulsation is absorbed in the space between the diffusers. 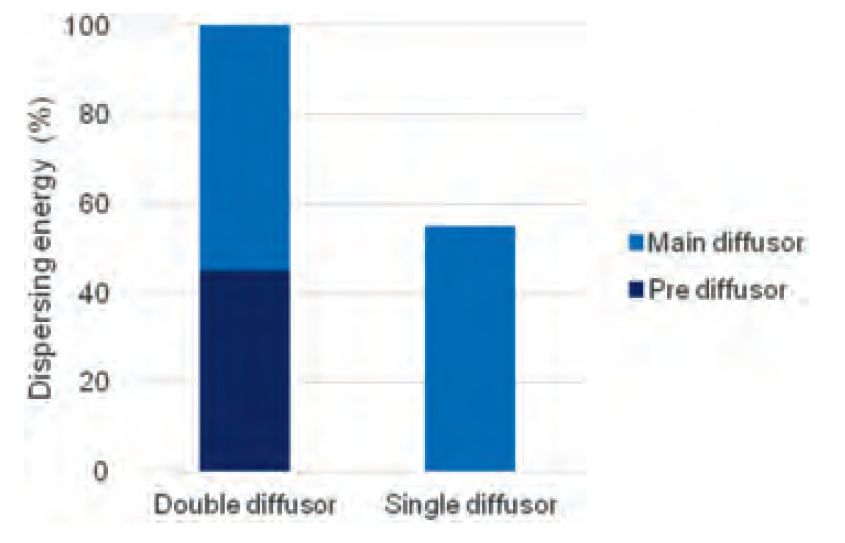 Good distribution over the width requires a perfectly dimensioned manifold. The double diffusor concept makes a contribution here as well.The pre-diffuser can be perfectly dimensioned to suit the direction of the slurry, which is supplied in cross-direction to the machine and then turns through 90° into the machine direction. If there are still slight differences over the width, these are correctedin the space between the diffusers.

In addition to the fibers being perfectly distributed over the width and length of the product, it is also important that the fibers are laid with the required orientation. If the visual aspect of a product is important, the fibers in the length and transverse direction of the product should be placed randomly, but homogeneously on the forming wire. There are also products that deliberately do not have isotropic properties.

If it is important for further processing of the product that its strength is higher in machine direction than in cross direction, it must be possible to lay more fibers in machine running direction. This is why the neXformer by ANDRITZ can convey the slurry at the correct speed relative to the forming wire by means of dewatering and by opening the front wall.

If the slurry flows at the same speed as the forming wire, fiber orientation will be more or less random in cross and longitudinal direction. If there is a speed difference, the fibers will beoriented more in longitudinal direction. ANDRITZ neXformer with double diffusor concept combines good formation with a very good adjustable isotropy.

The article is based on the lecture held at the Hofer Vliesstofftage on November 7, 2019 in Hof/Germany and was published in Technical Textiles 1/2020.

About the author: Leo Bos (leo.bos(at)andritz.com), born in the Netherlands in 1967, has a long professional experienced career about nonwovens processing and wetlaid technology and was enganged in serveral major projects. 2018 Leo joined ANDRITZ as Business Development Manager for the ANDRITZ Weltlaid business.