A hidden gem in geotextiles

Manifattura Fontana (Sioen Group), near Venice, Italy, is one of those hidden gems – a small-sized company with big ideas where innovation is in the very fabric of its being. The company recently doubled capacity in the manufacture of specialist nonwoven geotextiles by installing a complete state-of-the-art neXline needlepunch line supplied by ANDRITZ, making it the most productive geotextile line in the world.

Geotextiles are specialist nonwoven products that most of us don’t even get to see; however, they have become essential ingredients for the construction industry, including road building and foundations for buildings, as they reinforce the soil and stabilize the ground, making areas much more secure for building on. Manifattura Fontana, situated in Valstagnajust north of Venice, was established around 200 years ago, originally discussions, which ended in the acquisition of the company by Sioen in April 2016.“Manifattura Fontana has an excellent reputation in the production of geotextiles so this was a fantastic opportunity for us at Sioen to get a foothold in theindustry,” says Speltdoorn. Although the company had a goodreputation for excellent geotextile products, the management at Sioen could see enormous further potential inspinning and weaving wool, but has beena specialist in the field of geotextiles since the 1960s. The company was recently acquired by Belgium-based textile giant Sioen Industries, a niche manufacturer of specialist textile products with operations in over 20 countries. In fact it is the philosophy at Sioen to have operational excellence in all we do.

Orwig Speltdoorn, Director, Sioen Industries, and responsible for the Nonwoven Division and Manifattura Fontana says, “This region of Italy has always been an important area of manufacture for geotextiles; in fact, this is where a lot of development in the industry has come from. The management at Sioen were looking for an opportunity to enterinto the geotextiles market, as it’s an industry we strongly believe in when it comes tofuture growth and added value.”In 2015, the owner of Manifattura Fontana and the management of Sioen started discussions, which ended in the acquisition of the company by Sioen in April 2016.“Manifattura Fontana has an excellent reputation in the production of geotextilesso this was a fantastic opportunity for us at Sioen to get a foothold in the industry,” says Speltdoorn.

Although the company had a good reputation for excellent geotextile products, the management at Sioen could see enormous further potential in gaining market share in the geotextile market and immediately embarked on a major expansion program. But it had to get the investment in new technology absolutely right. Speltdoorn says, “Although geotextiles are niche products, they are still seen as something of a commodity, so operating the right equipment is absolutely essential in order to be profitable. In fact it is the philosophy at Sioen to have operational excellence in all we do, so we are always investing in the very best performing equipment to produce our textiles.” 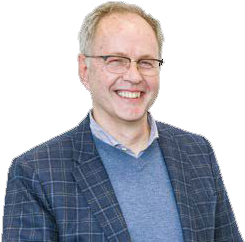 “Basically we came in at the very beginning and took a global view on the whole process.”

Speltdoorn had already had a number ofpositive experiences with ANDRITZ nonwoventechnology and equipment. Beforejoining Sioen he worked at a senior level inthe geotextile industry. “We knew straightaway that if we were going to achieveour ambition to become a major player in geotextiles, we needed to invest heavily in increased capacity, which at the same time needed to be the best available
technology. We took the time to have a really good look around the suppliers and benchmark the very best nonwoven technology on the market for the production
of geotextiles. ANDRITZ came out on top.

“I already knew of ANDRITZ due to my former position in running geotextile plants. So I already had an idea in my mind just what could be achieved at Manifattura Fontana. We knew that ANDRITZ could provide the capacity increase we needed, as well as the top technology. Another important element from my point of view was that we needed an excellent service and support, which, from my previousexperience, I knew we were going to get from ANDRITZ.”

Complete responsibility for the design of the line

After major consultation between Sioen, Manifattura Fontana, and ANDRITZ, it was decided to go ahead and order a complete nonwovens geotextile production line that would include all machines from opening and blending to an automatic packaging system. Also, for the first time in Italy, the line would feature air-through bonding capabilities in combination with calendering.

Most of the technology and equipment forthe line came from ANDRITZ, including:

Also, ANDRITZ was given complete responsibility for the design of the system, including the installation of other vendors’ equipment. Jean-Phillippe Dumon, Sales Director, ANDRITZ Nonwoven Division, says, “Basically we came in at the very beginning and took a global viewon the whole process. Sioen and Manifattura Fontana explained to us what they wanted to do, and what products they wanted to produce, and we designed the whole process. “The reality is, these lines are not just a case of putting machines in one after the other or next to each other. We have to carefully select what sort of equipment should be used in every part of the process. Yes, the capacity is very important, but being such a niche product, geotextiles demand all sorts of bespoke machine performance and capabilities,for instance, making sure there is evennessin terms of weight, and top mechanical fabric performances are essential.”

“This is one of the things we really like about the ANDRITZ approach to projects like this,” adds Speltdoorn. “We discussed our needs when it came to capacity, speed, and quality, and they listened intently. ANDRITZ experts then came backand told us exactly what we needed in terms of our production needs, right from dealing with the raw material down topacking finished product.”The quality of the final product is of maximum importance in the production of geotextiles at Manifattura Fontana; the company delivers for instance to construction companies involved in the reinforcing of some of the biggest dams in the world as well as the deepest tunnels and its products were used in the recent expansion of the Panama Canal.

Up & running - highest capacity in the world

Contracts for the project were signed in September 2017, after Manifattura Fontana secured new premises to site the new line. “We had to find a site that would house the new line, at the same time as allow us more space to expand,” says Speltdoorn. “So there was a short hold up until we found exactly what we were looking for.” The right building was found and after some renovations, including a new roof, all the equipment started arriving at the site in June 2018, with tests beginning in January this year and full production following shortly after. “I have to say that I was satisfied and impressed with the way that the whole project has been handled by ANDRITZ.

There have been a few teething problems but we like the way that those have been handled, with openness and transparency between both of our teams. “For the Manifattura Fontana personnel, this is completely new equipment and there has been a steep learning curve, but with the existing experience of needlepunching we have, along with ANDRITZ people who trained them, we have been really surprised at how quickly they have been capable of running the line on their own.” The line is now fully operational and already running in three shifts. This means that the ambition of doubling capacity at Manifattura Fontana has been achieved, at the same time as resulting in the company having the most productive geotextile production line in the world.

“The new geotextile line at Manifattura Fontana is a perfect example of what we can do at ANDRITZ to really make our customers ambitions become reality,” says Dumon. “In a nonwoven industry that is currently moving in many directions, ANDRITZ works with newcomers as well as leading companies, or independent mid-size producers, offering knowledge and expertise to enable the creation and running of an optimal, bespoke needlepunch line. This can be supplied entirely by ANDRITZ, where it can control everything and guarantee the final results, or, with its capability to mix technology, can supply individual machines into an existing line.”

Easy accessibility of the card for maintenance