For more than a century, hydropower was the main source of electricity production in Europe. It was essential for economic growth and wealth. Although other electricity generation technologies such as coal, gas, and nuclear power were developed later, hydropower has remained the most cost-effective – supplying affordable and sustainable energy to European consumers.

At the end of the 20th Century, climate change policies triggered the development of a renewable energy generation base, mainly wind and solar PV. As energy demand is continuously rising, renewable and sustainable energy sources are becoming steadily more important. Europe’s governments (EU-28, Norway, Switzerland, Turkey, and Iceland) have all set binding targets to reduce greenhouse gas emissions by at least 40% by 2030 and to significantly increase the share of renewable energy use. To achieve these ambitious goals and to build an affordable, secure, and sustainable energy system, many European countries have launched numerous incentives and regulations to boost power sector decarbonization.

With its controllability, flexibility and storage capability, hydropower is playing a major role in the transformation of the European power system. In 2017, about 2.3 GW of hydropower capacity was added across the wider European region, including non-EU countries. This brings the total European hydropower capacity to 278 GW.

Despite unfavorable weather conditions with drought and low rainfall, hydropower generated more than 770 TWh (incl. Georgia, Kazakhstan, Russia, and Turkey) of clean electricity in 2017. While wind, solar and other renewable energy sources are increasing throughout Europe, these intermittent energy systems continue to benefit from and rely upon the balancing capabilities, storage potential and other grid services of hydropower. Thus, hydropower will remain the backbone of renewables development in the European power grid.

With resource efficiency, flexibility, competitive costs, and low-carbon electricity for both peak and base loads, hydropower remains more than fit to meet the future challenges of the energy transition.

“Hydropower is still the backbone of the ­European grid and still a major ­player on the road to a carbon-free, zero-emission future.”

Another vast renewable energy resource is the ocean. The opportunities to generate power from our ocean basins are many and varied, whether through waves, streams or tidal range. Ocean energy can play an important role in the future, contributing to the development of trendsetting concepts. This is especially true in Europe, where in many places geological and topographical conditions are ideal. Today, the commercial aspects of harnessing the power of the oceans are not satisfactorily advanced and thus require more political support. Nonetheless, the scale of the resource is a compelling argument for further development of ocean energy.

Refurbishment and upgrading of existing plants are the main hydropower activities in Europe today. This reflects conditions during the 1960s and 1970s, when the European economy showed impressive growth. Most countries invested in greenfield hydropower plants to meet rapidly increasing energy demand across both domestic and industrial sectors. As a consequence, almost 60% of Europe’s total installed hydropower capacity is more than 40 years old and now needs to adapt to changing grid and environmental regulations, as well as new operational requirements. Modernization, rehabilitation and uprating are essential for existing hydropower plants to increase their efficiency and safety, prolong their lifetime and provide the required grid services.

Though throughout Europe only very few greenfield hydropower projects are being launched currently, there are ­notable exceptions. Decreased investment in view of very tough environmental stipulations, low electricity prices, and uncertain and inconsistent climate and energy policies, has been countered in European regions where there is a strong interest in boosting the economy and securing better water and electricity supplies. Another exception comes from pumped storage projects. Pumped storage is the most important and economic solution for large-scale energy storage today. It is used to balance the variable output from renewable energy sources like wind and solar and therefore makes a significant contribution to future clean energy goals. However, even with pumped storage, economic and political uncertainties can lead to some projects failing to progress to fruition. 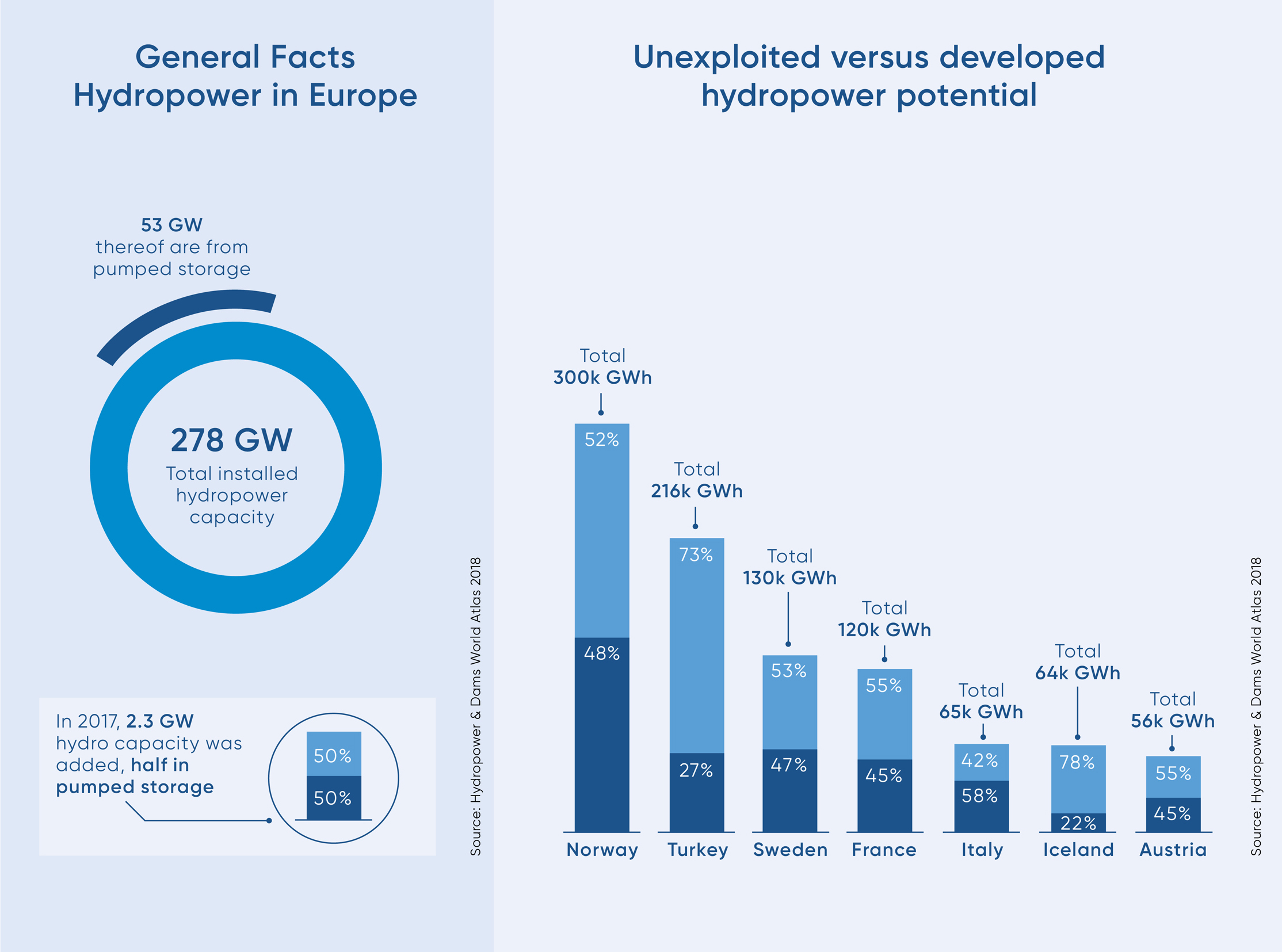 Within Europe’s mountainous regions, pumped storage projects are currently underway. In some cases existing hydro facilities are extended or refurbished, such as Obervermuntwerk II in Austria or Hongrin-Leman in Switzerland. Some projects are completely new, like Foz Tua and Gouvães in Portugal. Alongside pumped storage, conventional large hydro schemes are also being developed in certain selective, mainly non-EU European, areas. Projects include the Upper Kaleköy on the Murat River in Turkey and, in Central Europe, the Mur hydropower plant in Graz, Austria.

In recent years, the European market for small hydro­power has steadily declined due to generally low electri­city prices and the rapid expansion of solar. Again though, Europe’s diversity reveals exceptions. In some countries numerous small hydropower projects have and are being realized where beneficial incentives exist, typically motivated by climate change or economic development policies. Examples are found in Norway, Italy, Turkey, Austria, Georgia, Switzerland, and in the UK.

Russia and the former Soviet Republics in Central Asia also offer multiple opportunities for the refurbishment of exis­ting hydropower plants. Such installations typically ­suffered from neglect during the Soviet era. Examples include Dnipro 1 in Ukraine and Shardarinskaya in Kazakhs­tan. Numerous small hydro projects are also scattered throughout the Central Asian region, representing further interesting potential.