ANDRITZ has created a simple but remarkably effective way to improve energy efficiency of the pulp mill, at the same time increasing the mill overall evaporation capacity. The DEvap is a small digester evaporator unit integrated into the cooking plant.

Pulp mill process experts at ANDRITZ are constantly looking for ways to optimize energy consumption mill-wide. One of the latest innovations is the DEvap, a mini digester evaporator that generates secondary steam which is used for heating chips in the digester instead of fresh steam. The DEvap concept can be as part of a greenfield pulp mill or alternatively retrofitted into an existing cooking plant.

Arttu Klemola, ANDRITZ Sales Manager, Evaporation Plants, says, “In a traditional digester and cooking plant, fresh medium pressure steam is used in the digester top to heat up the chips and cooking liquor to the temperature needed. This steam then condenses inside the digester which then needs to be evaporated in the evaporation plant.

“When the DEvap digester evaporator is integrated into the fiberline, 100% of the direct steam to the digester top is replaced by secondary vapour. This makes a big difference when it comes to energy efficiency. Secondary vapour is generated by evaporating part of the black liquor from digester extraction screens with DEvap. Medium pressure steam is used in the DEvap, instead of in the digester top. As the medium pressure steam no longer condenses inside the digester, the dry solid content of the black liquor going to the evaporation plant is increased and therefore less capacity is needed in the evaporation plant.”

Displacement batch cooking plants use direct medium pressure steam in the pressure controls of the accumulators and the final cooking temperature adjusting in the heating sequence of the digester circulation. All these steam inlets can be replaced with steam generated by DEvap.

In retrofit cases, reduction in needed evaporation capacity can add up to almost 10%, which can be very beneficial especially if the existing evaporation plant limits mill capacity.

Due to the increased efficiencies and energy saved using secondary steam, the return on investment on the DEvap is very short, just 1 – 2 years. Lasse-Matti Björkstedt, Development Manager, Evaporation Plant, says, “The benefit of the digester evaporator is that the condensate of medium pressure steam is collected, not condensed on the chips and black liquor, and can be sent back to the boiler feed water system. This condensate has significant value in terms of feed water preheating and demineralization costs, which, added to the reduction in steam consumption in the evaporation plant, means major pay backs.”

For a mill the size of Metsä Fibre’s Äänekoski bioproduct mill, the steam flow to the top of the digester is around 15 kg/s. If this steam is generated via a DEvap instead a direct MP-steam, the water flow in weak black liquor is correspondingly lower, resulting in 15 kg/s less water to be evaporated. Also the steam condensate can be returned to the power plant, as the direct steam input is replaced with a secondary vapor from the DEvap. In case of a direct steam feed, the lost amount of steam condensate would be replaced with demineralized water to maintain the required amount of water/steam in the power plant circulation.

A steam economy of a modern 7-effect evaporation plant is normally about 6 tonnes of evaporation per 1 tonne of steam, so the LP steam saving in the evaporation is 15 kg/s ÷ 6 = 2.5 kg/s.

The corresponding steam saving can be estimated by dividing the heat power with an approximate condensation heat of the steam: 8,170 kW ÷ 2,150 kJ/kg = 3.8 kg/s. 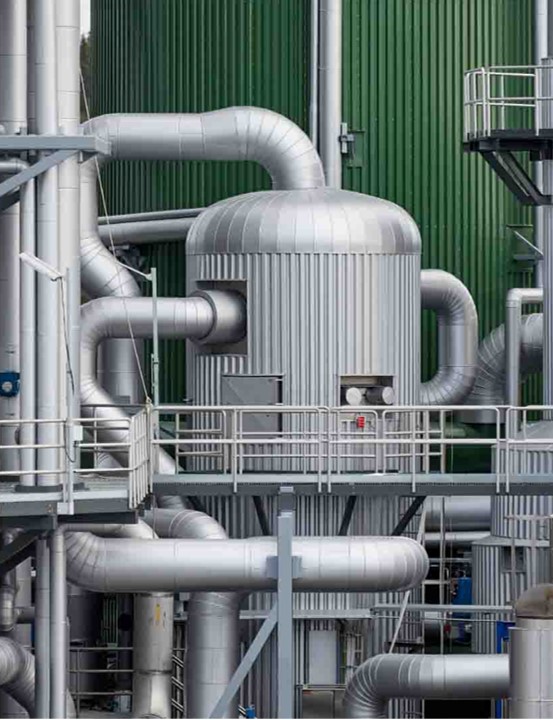 Thus the annual savings are the extra generated electrical power multiplied with the annual operating hours and the price of electricity: 8500 h/a × 2.835 MW × 45 € / MWh = 1.1 MEUR per year.

DEvap digester evaporators are built in the usual ANDRITZ robust style using its lamella evaporation technology. Tuuli Oljakka, Technology Director, Evaporationr Plant, says, “The advantage of lamella technology is its inherently non-scaling heating surface; there are fibers in the liquor from the cooking process in the fiberline. Using lamella technology means there is no extra washing required of the heating surface.”

A DEvap digester evaporator has been successfully installed at Metsä Fibre’s bioproduct mill, Äänekoski, in Finland.  Another confidential customer recently ordered an DEvap system to be used for debottlenecking and increasing the mill’s evaporation plant capacity at its mill in Austria.

Äänekoski: A mill for the 21st century