Megatrends - A scenario of the future

We are living in a changing world, a rapidly changing world. Even though these changes are marked over years or even decades, they are long-term and fundamental. They are shaping the future of all nations, countries, social structures, and of every individual. And they are happening today.

The biggest changes are encompassed in so-called  megatrends. The most important of these megatrends are urbanization, shifts in economic power, demographic change, climate change, resource stress, and technology development. It is in this context that people are discussing a “Scenario 2050”.

Forecasts that the global population will be about 10 billion people in 2050 mean that energy demands will have at least doubled by then when compared with today. This situation poses a challenge for politics, economics, and research. It’s a challenge that requires serious consideration today.

With global megatrends shaping our present, answers to the questions of the future are needed today. Upon examination of changes in demographics, economics, and energy policy, it quickly becomes clear that we are heading toward a challenging future.

In 2050 half of the world’s population will live in major urban centers and there will likely be at least 40 cities with more than 10 million inhabitants. Megacities such as New York, São Paulo, Cairo, and Beijing will have to make billions of dollars of infrastructure investment within the next 10 years. Urban technologies to keep growing cities viable are racing ahead. An example is the emergence of “smart cities” in which inhabitants can interact intelligently and efficiently with their urban environment. But despite increasing energy efficiency, the energy demands of such megacities will be enormously high.

Population increases, urbanization, and increasing energy demand will ensure that conventional energy sources will reach their limits in the near future. With respect to current consumption data, it appears that in just a few decades it will no longer make economic sense to harness fossil fuels. Regardless of this, existing fossil reserves will still be used extensively causing additional increases in greenhouse gas emissions, resulting in global warming. The goal reached at the climate summit in Paris at the end of 2015 to limit global warming to less than 2°C will only be achieved with extreme efforts. Integrated solutions that optimally combine renewable energies are already in demand today and will be even more so in the future.

Regional differences in demographic development could not be more dramatic. In the future, the majority of the world's population will be over 65 years old, especially in the industrialized nations. On the other hand, the population of Africa will probably have doubled by 2050, while the population of Europe will shrink. By this time, individual countries in Africa could have more inhabitants than the USA has today.

The way individual national economies are classified will become less relevant in the future. Increasing incomes and closing wage gaps will lead to a growing global middle class. Markets grow unpredictably, however. For example, China and Mexico have grown exceptionally over the last years, whereas countries in Europe have seen their economies stagnate. To reflect these changes we have to adjust our view of the global economy. Some markets will become more important due to the value chain and become core markets for global businesses. Developed countries will benefit from a more diverse business culture, skilled talent will be spread multinationally, education and health care will become more important indicators.

Technology development is an underestimated force today, but will gain more and more importance as a major component in the re-shaping of the future economy. The time it takes from invention to breakthrough to en masse application is getting shorter and shorter. For example, it took 76 years for the telephone to reach half the population, the smart phone took only about a decade.

Digitalization has had a profound impact not only on society, but also on the economy. Today the value created by technology, especially internet-based technology, is extraordinary. The importance of e-commerce, interconnectivity and digital brands is crucial for industry. Social media, mobile applications and cloud services to meet the customers’ needs are already vital parts of future strategy to succeed in the digital age.

The role of hydropower in the future

In a time when producing fossil resources is becoming less economical and energy demands continue to climb, a compromise between the needs of the present and responsibility to future generations has to be found. Hydropower is the most proven and best-developed form of renewable electricity generation. Increasing awareness of global climate change and sustainable electricity generation, social responsibility on the part of politics, as well as an increasingly critical attitude toward CO2 emissions from fossil fuels, will cause demand for hydropower to increase in the coming years.

Currently, approximately 16% of the world's electrical energy comes from hydropower. In the future, the assumption is that the enormous and increasing demand for electricity will be fulfilled by those energy concepts that best combine the various resources available. Hydropower is trend-setting here, for it does not end with power generation. Instead, it offers a wide spectrum of applications, including energy storage for grid stability and peak load coverage.

Hydropower is sustainable, renewable, and flexible, has many benefits and great potential. It is the answer to many of the questions posed for the future. Constant research and development will ensure that hydropower remains the most important renewable energy resource, as it is today.

The traditional approach to the operation of hydropower facilities has to be reconsidered though. New demands are fast response times, frequent load changes, and extended operational ranges. Anticipated future requirements include calls for frequency regulation by run-of-river power plants, mini pumped storage for balancing small wind farms, ocean energy applications combined with off-shore wind farms, small hydro to balance the impact of clouds passing over solar plant, as well as upgrading all existing power plants to new standards and network codes, and linking them with the state-of-the-art automation systems of the digital world.

For ANDRITZ HYDRO, the changing future is a big motivation to find tomorrow’s solutions today. The immense potential of hydropower has by no means been fully exploited – it can still make a significant contribution to the redesigned and sustainable future energy supply system. 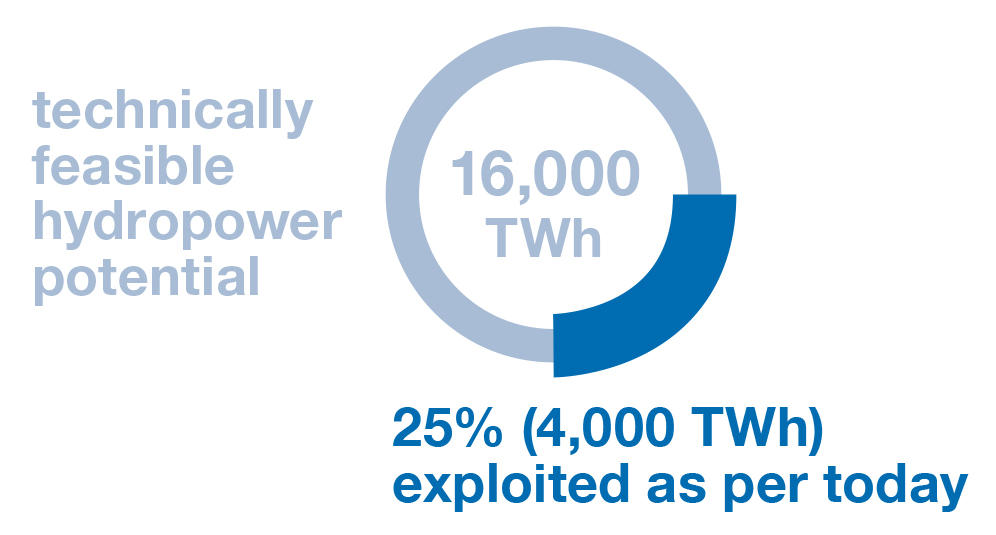