When Austrian professor Viktor Kaplan (1876 –1934) filed his essential patents for the eponymous turbine in 1912 and 1913, he opened the way for a new technology able to use low hydrostatic heads for power generation in an economically feasible way - especially at run-of-river plants.

In particular, the horizontal type of Kaplan machine - the Bulb turbine - shows extraordinary flexibility in its application. From small to large, from run-of-river to tidal, and from fixed to variable-speed everything is possible within a head range of 0.5 up to 30 meters.

However, new market needs have meant reconsidering several basic de­-sign principles. For example, having ecologically, as well as economically, feasible solutions is becoming an ever greater consideration in the planning and approval process for hydropower projects.

In addition, the intention to utilize tidal forces as renewable and clean energy resource has triggered new concepts concerning hydraulic as well as mecha­n­ical design and the extended application of sophisticated, stainless materials.

The worldwide leader in Bulb turbine units - with a total installed capacity of approximately 6,500 MW and covering a market share of more than 70% - ANDRITZ HYDRO focused its research and development efforts on these new demands at an early stage. 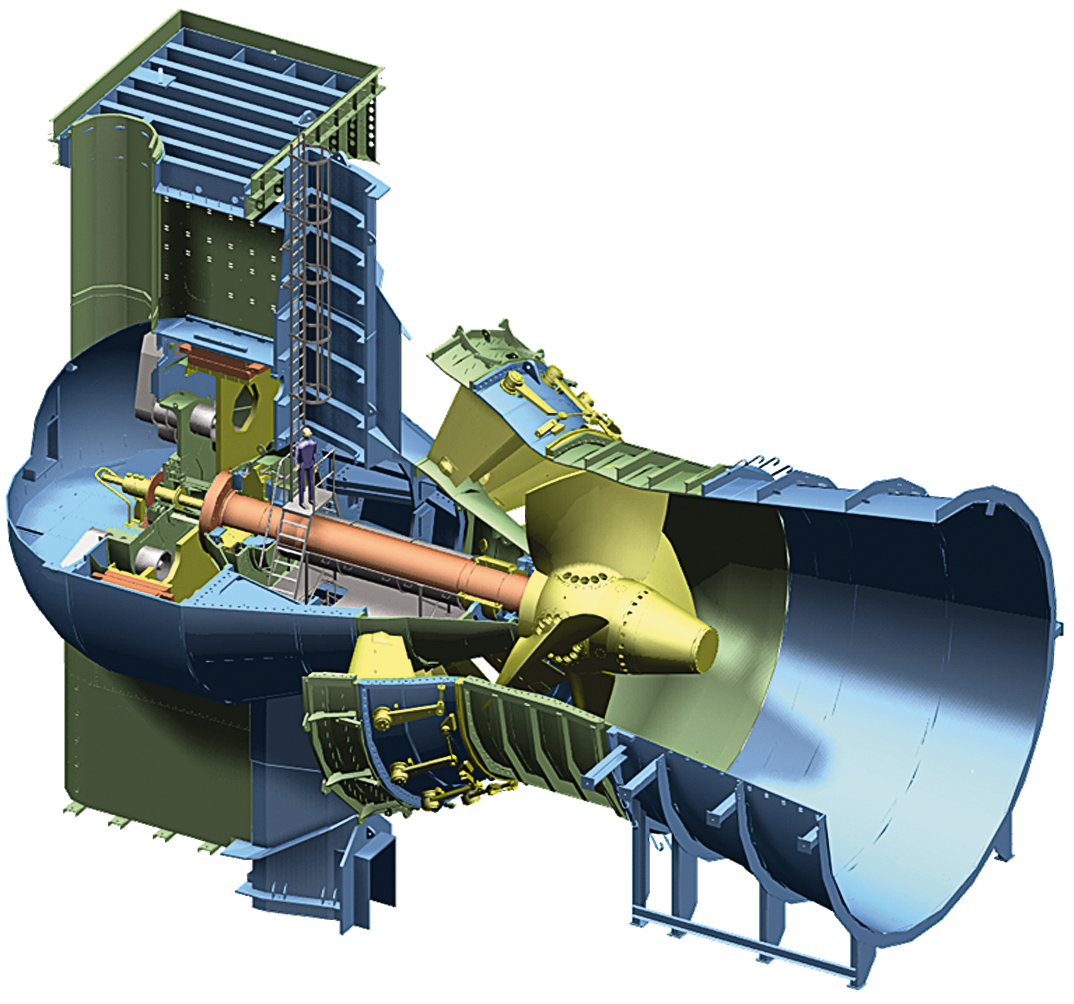 Increasing demands for ecological performance have prompted changes in the use of problematic substances, such as lubricating oils, while the impact hydropower stations have on aquatic life has become a major issue for new and the refurbishment of existing hydraulic turbines.

The development of oil-free solutions for Bulb turbine runners was initiated many years ago and ANDRITZ HYDRO has recorded more than 130 references within the last 20 years for oil-free Kaplan runners up to largest diameters, outputs and heads in the Kaplan range - always offering the best solutions.

Instead of oil, the hub is filled with water together with a corrosion inhibitor similar to the citric acid found in lemons and which is non-toxic and not hazardous.

Blade bearings also represent a key element in realizing an oil-free runner hub. Extensive testing has been performed in order to determine the best solutions for bearing materials. The result is a comprehensive database comprising coefficients of friction, wear and allowable pressures. Based on that, the best material can be selected for each application.

ANDRITZ HYDRO also invests in the research and development of fish-friendly turbine technology. In order to reduce damage to the fish population – as well as avoiding damage to the turbines - many theoretical approaches and computation models have been developed over the years. By combining hydraulic knowledge with biological understanding, ANDRITZ HYDRO is able to minimize fish injury without major energy losses.

Records from one unit operating in these two different modes show a significant increase in load-cycles for the differential pressure of the runner servomotor actuating the blade movements during primary control, when compared with discharge control operation.

More load cycles inevitably make fatigue a greater consideration. Fatigue is influenced by the material, the geometry of the parts and the cyclic loading. In a Bulb turbine the blade is affected by centrifugal force, axial thrust and circumferential force as well as hydraulic torque from the pressure distribution on the blade.

Faced with changing operational demands ANDRITZ HYDRO has developed tools to accurately assess the impact of changing operational requirements on fatigue - as well as other considerations - and can therefore support energy producers in the diagnosis and assessment of the residual service life of turbine equipment.

ANDRITZ HYDRO has also developed a sound and leading technology in the tidal barrage field, starting with the Annapolis tidal plant in Canada back in 1984. Technical development continued with the Shiwa tidal plant in South Korea in 2004, and improved further during the on-going design of the units for the Swansea Bay Lagoon tidal plant in Great Britain.

Tidal energy can be used in two ways - by utilizing the potential energy of the tidal lift or the kinetic energy of the tidal stream. Both can be realized with horizontal Kaplan turbines of differing design and the push to extract energy from the tides has also prompted technical innovations.

For instance, the large head variations found during a tidal cycle initiated the intro­duction of variable-speed technologies which, in addition to movable guide vanes and runner blades, lead to triple-regulated machines.

ANDRITZ HYDRO Hammerfest was and is a pioneer in tidal current technology. The tidal flow turbine concept was developed in 1997; the first 300 kW prototype was installed in 2003; a 1 MW unit followed in 2011 and the first commercial array – with 265 units in total - will be started with four 1.5 MW demonstration units in 2016.

Viktor Kaplan’s idea may have emerged more than a century ago, but in light of changing environmental, economic and operational needs ANDRITZ HYDRO strives to ensure that his ingenious basic idea for a low head and efficient turbine is further developed in order to fulfill today’s demanding requirements and to make his legacy FIT FOR THE FUTURE.