30 GWh into the Grid

The extension of the pumped storage plant Hongrin Léman, owned by Forces Motrices Hongrin-Léman S.A. (FMHL), has been fully operational since early 2017. This pumped storage scheme uses the Lake of Hongrin and Lake Geneva as reservoirs and is expected to provide about 1,000 GWh of peak power per year, supplying more than 300,000 households with electricity.

In 2011, ANDRITZ HYDRO was contracted to deliver two new ternary generating sets, including motor generators, Pelton turbines, digital and oil hydraulic governors, as well as the cooling water system of the entire plant. Furthermore, as part of a consortium, ANDRITZ HYDRO delivered four of the six high head spherical valves needed, including oil pressure units. Besides design and manufacturing, the scope of supply also comprised installation, commissioning, and efficiency testing of the equipment. Strain gauge tests have been conducted to establish the runner bucket vibration behavior at various operating points of the unit. With a total output of about 480 MW, the capacity of the plant was almost doubled with this extension.

Pumped storage is considered to be an indispensable complement to renewable energy sources; it can provide power at short notice and at large capacities, which is mandatory for the stability of the European grid. FMHL considers the development of renewable energy sources will increase the demand for rapid grid stabilization even further in the future.

Despite winter time, the mild weather during the last two weeks in 2016 entailed a relatively low power consumption in Europe allowing the Hongrin Léman pumped storage scheme to fill its almost empty reservoir, the artificial lake Hongrin. However, due to a temperature drop in Europe between 30th December, 2016, and 8th January, 2017, and the simul­taneous low availability of large volumes of other forms of renewable energy, the scheme was able to provide about 30 GWh of electrical energy to the grid at short notice, further proving the advantages of the pumped storage concept. 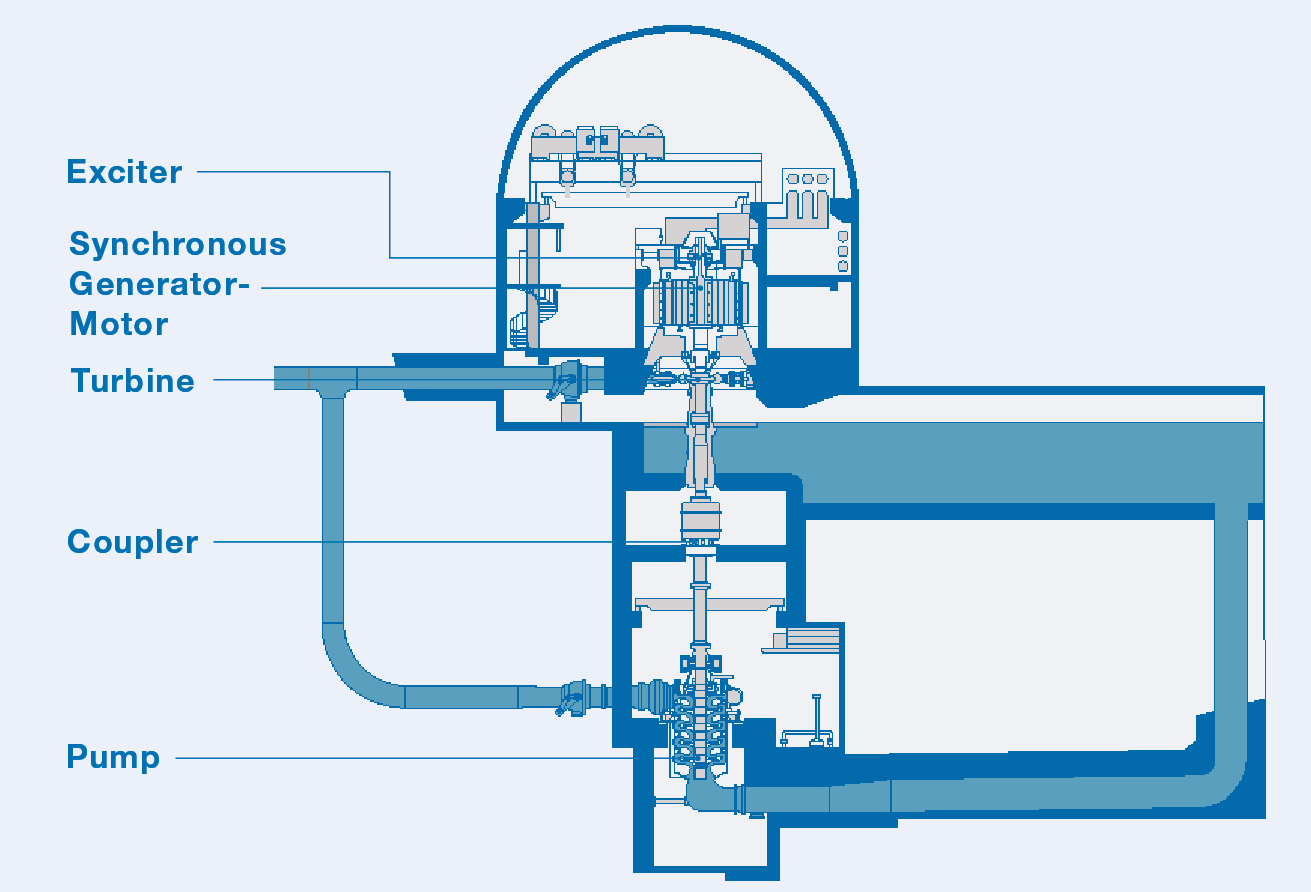 Ternary Generating Unit
generator-motor, turbine and pump arranged along the same shaft line; only one electric machine acting as motor; no reversal of rotation needed when operation is changed from pump to turbine or vice versa; short transition times from one mode of operation to the other.

Bringing Hydro to the Heart of the City - Chaudière Falls, Canada