A boost for the lime kiln - LimeFlash-H

Increasing capacity of the lime kiln is time consuming and costly as it usually involves the lengthening of the existing kiln shell, or even a replacement with a larger diameter. ANDRITZ experts have approached the challenge from a completely different angle, and now a capacity increase of up to 40% can be achieved at much lower costs. 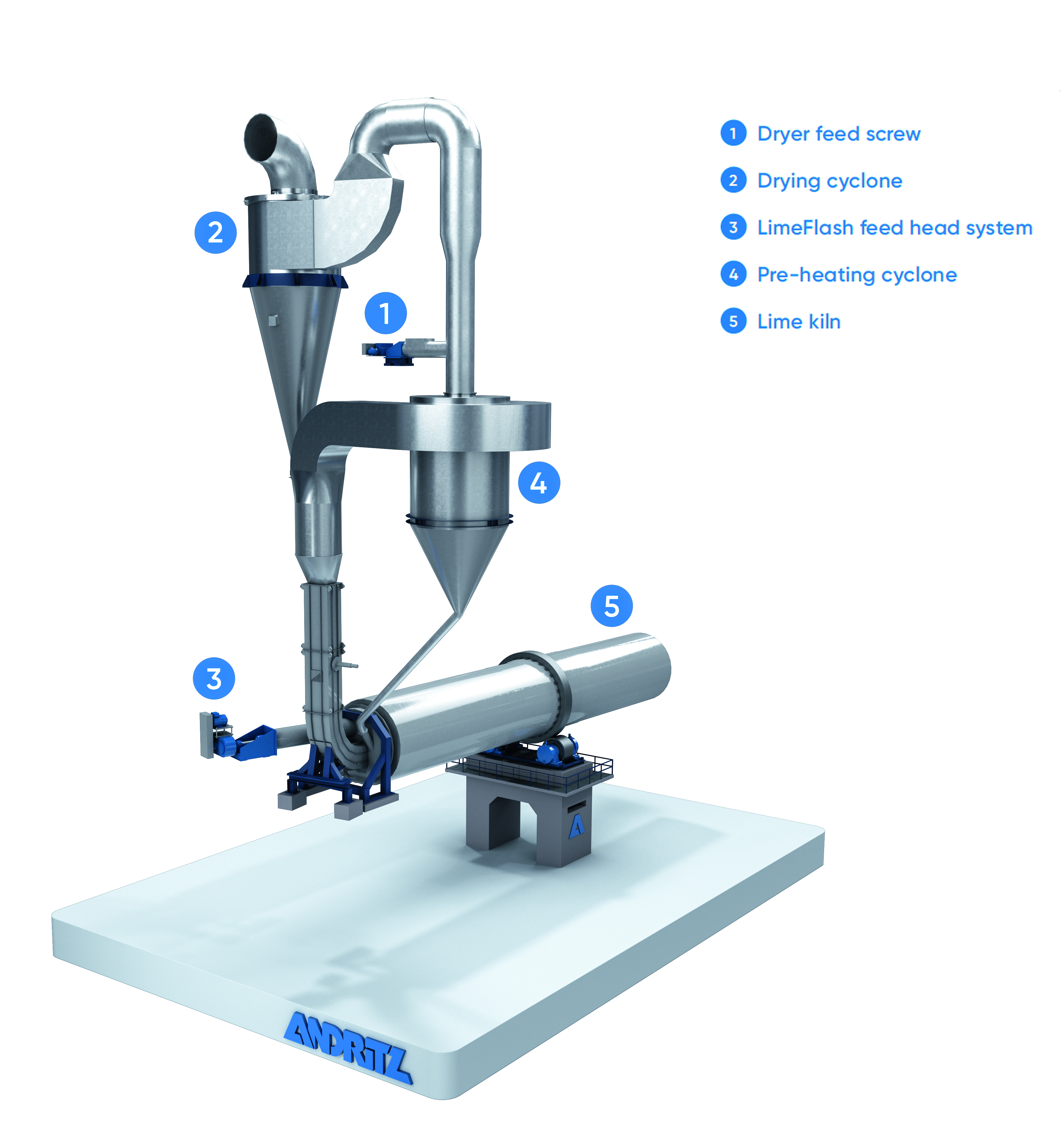 LimeFlash-H – a boost for the lime kiln

Typically, lime mud drying (LMD) at the kiln feed end is performed in a standard manner across the industry with ANDRITZ supplying its own LimeKiln™ solution for the white liquor plant. LMD kilns are also referred to as a “flash dryer kiln type”. ANDRITZ has installed some 100 of its standard lime kilns in pulp mills around the world.

Before the LMD technology was introduced, all the kilns were “conventional long kilns” with the first LMD lime kiln being delivered in 1990. In 2007, ANDRITZ introduced its own patented solution, LimeFlash™ for increasing the capacity of the lime kiln, which has now been installed successfully at over 20 pulp mills across the globe.

ANDRITZ has now further developed the successful LimeFlash solution with the main focus on further increasing the capacity of lime kilns at the same time as reducing energy consumption – and all without the usual large capital outlay. Mika Mussalo, ANDRITZ Head of Product Management, White Liquor Plant says, “We have been engaged in a lot of development work since the first delivery of LimeFlash technology in 2007. This has included solving several process challenges and several changes in mechanical structure, including modifying the duct shape from round to square.”

“As LimeFlash has evolved over that time, we have seen clear opportunities for more gains by applying the latest technology we have developed for LimeFlash-H™, for instance, increasing capacity of the lime kiln by as much as 40% at the same time as decreasing energy consumption in the lime kiln. All this is achieved without major, expensive modifications to the existing kiln shell,” says Mika Kottila, ANDRITZ Head of Technology, White Liquor Plant.

“LimeFlash-H can now be considered part of the next generation in solutions for maximizing efficiencies of the lime kiln.”

LimeFlash-H is a further development of LimeFlash where specific energy consumption is decreased by recovering flue gas heat into preheated lime mud. It also gives the potential to run the same size kiln with a higher production, by adding the latest equipment and technology vertically into the ANDRITZ LimeKiln process by using two cyclone systems in the existing building.

New features of the LimeFlash-H include a preheating cyclone (an additional second cyclone) with refractory, a new design of the pressure lock under the cyclone, an elevated operational temperature of around 500 °C in all related equipment after the pre-heating cyclone, and a new lime mud feeding point above the preheating cyclone.

“LimeFlash-H can now be considered part of the next generation in solutions for maximizing efficiencies of the lime kiln,” says Kottila.

INVESTMENT SAVINGS UP TO 70%

A current LMD lime kiln with a diameter of 3.6 m, a length of 75 m and with a capacity of 300 t/d burnt lime, could see a capacity increase to 510 t/d with the implementation of LimeFlash-H. Major investment savings are made as the lime kiln size remains the same, and there are no requirements for civil works.

This represents a capacity increase of 40%, at the same time as running with ultra-efficient heat recovery using the LimeFlash-H two-cyclone system. Further advantages include the lime kiln operating with a higher feed head temperature, flexibility to operate with different process conditions, minimum maintenance, and excellent availability.

“Early indicators suggest a capacity increase of a lime kiln by 210 t/d by upgrading to LimeFlash-H can make an investment saving of up to 70% in comparison to installing a new lime kiln,” says Jukka Wasström, ANDRITZ Sales Manager, White Liquor Plant.

Taking the lead in the development of chemical recovery technologies.