ANDRITZ Hydro is one of the leading global suppliers of electro-mechanical equipment and services for hydropower plants.

ANDRITZ Hydro is part of the global ANDRITZ group. HYDRO is a global supplier of electromechanical systems and services (“from water-to-wire“) for hydropower plants and one of the leaders in the world market for hydraulic power generation. Furthermore, the company has a leading position in the growing modernization, refurbishment, and upgrade market for existing hydropower plants. 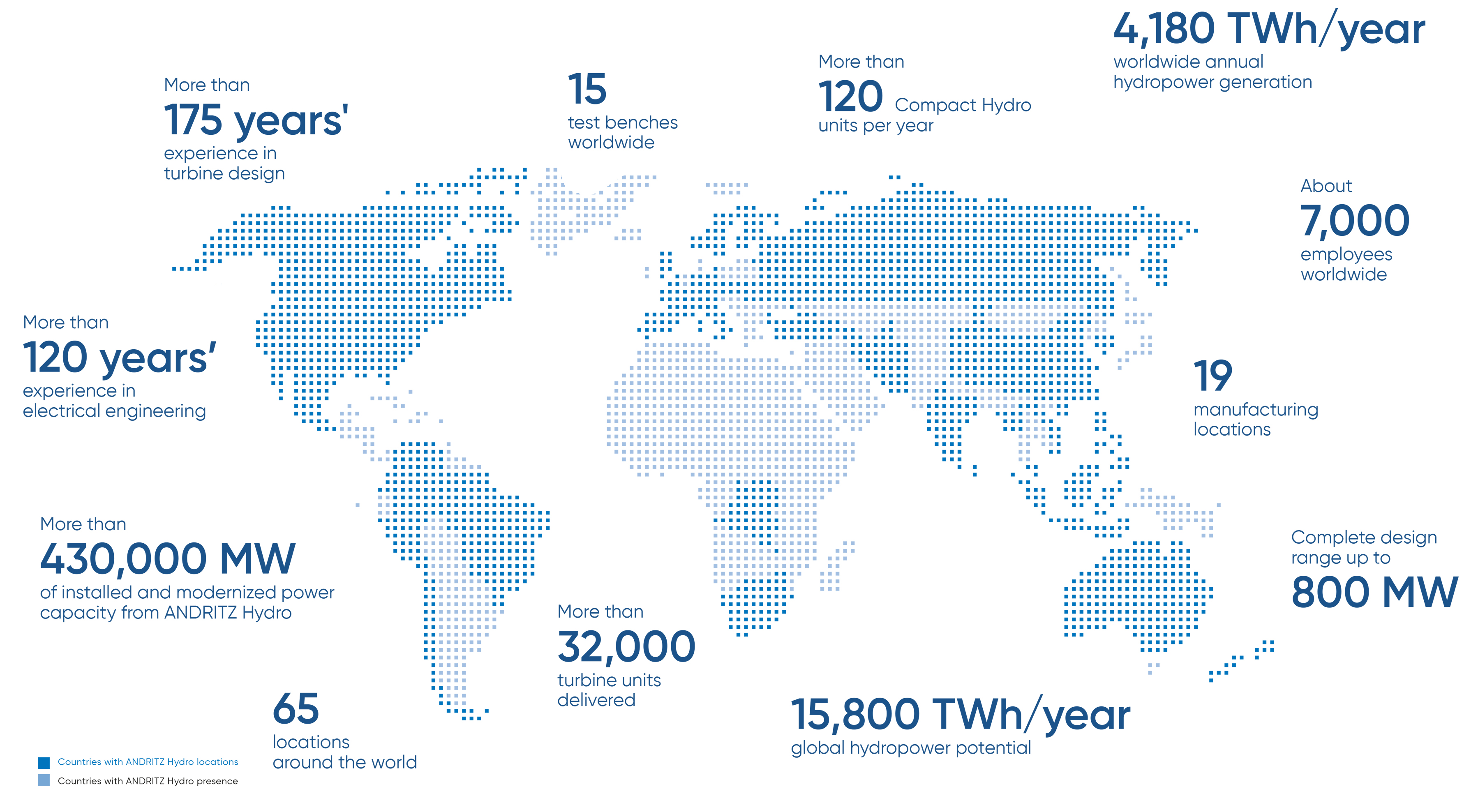 With over 175 years of accumulated experience and more than 31,600 turbines installed, totaling about 434,600 megawatts output, the company provides the complete product range, including turbines, generators, and additional equipment of all types and sizes – “from water-to-wire” for small hydro applications up to large hydropower plants with outputs of more than 800 megawatts per turbine unit. ANDRITZ Hydro’s “from water-to-wire” concept ensures long term sustainable solutions for green field and rehabilitation projects.

ANDRITZ HYDRO Pvt. Ltd has a leading position in the Indian subcontinent and is providing hydro-mechanical and electro-mechanical equipment for hydropower plants all over South East Asia, Australia and New Zealand.

Constant interaction and training with ANDRITZ Hydro’s locations worldwide contribute to the high quality level in regards of latest technical and management standards. ANDRITZ HYDRO Pvt Ltd. follows the global ANDRITZ Hydro Group standards and quality procedures which are constantly updated. The company has been accredited with quality certifications and has a quality management and assurance program - ISO 9001, ISO 14001, and OHSAS 18001 - meeting all market requirements.

Together with further ANDRITZ Hydro locations project highlights were successfully completed with Hydro Tasmania in Australia; Mighty River in New Zealand; Innergex Renewable Energy and Altagas Ltd. in Canada; Govddesaga Kraftverk AS and Statkraft in Norway as well as Kurtsuyu Elektrik Uretim A.S & Yapsian Electric Uretim AS in Turkey.

History of ANDRITZ Hydro in India

ANDRITZ Hydro has been active in the Indian market for more than 100 years. The first equipment deliveries took place for HPP Sivasamudram in 1903. Mid-1970, ANDRITZ Hydro opened an office in the city of Mandideep.

ANDRITZ HYDRO Pvt. Ltd. was established in 1996 through a joint venture between ELIN Austria and Crompton Greaves India for all type of generators. With the take-over of the Crompton Greaves’ shares the entity later became part of VA TECH Hydro, Austria.

After strategic mergers and acquisitions in the subsequent years and the takeover of VA TECH Hydro by the ANDRITZ GROUP, ANDRITZ HYDRO Pvt. Ltd. was renamed in 2008

Manufacturing at ANDRITZ Hydro in India

The comprehensive range of products and services of ANDRITZ Hydro meets customer requirements on a single-source basis for the hydropower market.